I think it's safe to say we can expect these new safety features and tech in the Prologue and other upcoming Honda EVs. 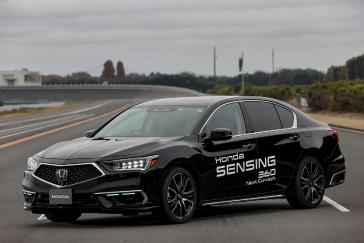 These latest safety advances reflect a global vision announced by Honda global CEO Toshihiro Mibe in April 2021, to strive for both zero traffic collision fatalities involving Honda motorcycles and automobiles globally by 2050 and carbon-neutrality for its products and corporate activities by 2050. More details about that announcement, are available here.

With an expanded sensory range around the entire vehicle and currently available on certain models sold in China, the first generation of Honda Sensing 360 mitigates blind spots to enhance collision avoidance, while also reducing driver burden. Starting in China in 2024, the next generation of Honda Sensing 360 will feature new technologies to further reduce driver burden by reducing the likelihood of collisions through accurate detection of abnormal conditions occurring to the driver and the vehicle’s surroundings. By reducing health-related or human error-triggered collisions with these new technologies, Honda will strive to offer vehicles which encourage customers to want to go out more actively and go farther in their vehicles.

Honda also will accelerate the advancement and popularization of Honda Sensing Elite, a flagship variation of Honda Sensing featuring advanced safety technologies. Honda has been developing technologies that will assist the driver to achieve a safe and seamless ride from home to their destination with complete peace of mind on any roads, including non-expressways. This includes technologies to assist the driver on non-expressways including a hands-off function while driving through a traffic jam on arterial roads; to enable hands-off functions during merging onto and exiting from an expressway at a road junction; to assist the driver by automatically parking in and driving out of a home garage.

Through the application of Honda’s original AI, which “grows” while accumulating experiences, much like humans, Honda Sensing Elite increases its capability to recognize complex scenes and handle driving situations that occur in complex environments such as on non-expressways. Specific launch plans for the next generation of Honda Sensing Elite have not yet been announced.

Honda Commitment to Safety
Honda is committed to “Safety for Everyone” and is working to further improve safety for everyone sharing the road. The company’s goal is zero traffic collision fatalities involving Honda motorcycles and automobiles globally by 2050. Honda operates two of the world’s most sophisticated crash-test facilities in Ohio and Japan, and is responsible for numerous pioneering efforts in crashworthiness, collision compatibility and pedestrian safety.

Advanced passive safety features include Honda’s proprietary Advanced Compatibility Engineering™ (ACE™) body structure and next-generation driver and passenger front airbag technology, which are designed to provide a high level of collision protection for occupants. Advanced active safety and driver-assistive systems found in Honda Sensing® and AcuraWatch™ technologies, now on nearly 7 million vehicles on U.S. roads, are designed to reduce the frequency and severity of collisions while also serving as a technological and perceptual bridge to the more highly automated vehicles of the future.

More information about Honda is available in the Digital Fact Book.

"This includes technologies to assist the driver on non-expressways including a hands-off function while driving through a traffic jam on arterial roads; to enable hands-off functions during merging onto and exiting from an expressway at a road junction; to assist the driver by automatically parking in and driving out of a home garage."
1 - 2 of 2 Posts
About this Discussion
1 Reply
2 Participants
Last post:
JDMEV 2 mo ago
Honda Prologue Forum
Honda Prologue EV Community and Owner's Club - Join the conversation about the new all-electric Honda SUV
Full Forum Listing
Explore Our Forums
Honda Prologue General Discussion Forum Honda Prologue Videos